The Entrepreneurship Cell of Shyam Lal College was formed in the month of September with the guidance and support of the Principal, Dr. Rabi Narayan Kar.
Dr. Bharat Bhushan, Jyoti Arora and Monika are the faculty advisors associated with the E-Cell, SLC.

The E-Cell team of SLC, created history by getting better of almost 400 teams at the prestigious National level competition held by the IIT-Bombay called National Entrepreneurship Challenge to emerge as the Champions. Overall more than 400 teams had registered for the event out of which only 15 had entered the final round. The final round was held at the IIT-Bombay campus. The teams had participated from all over the country. From Delhi, teams from College of Vocational Studies, and NSIT had also participated.

The cell was formed just 4 months back by the approval of the principal Dr. Rabi Narayan Kar. This was a long event which needed the team to endure hard efforts for a span of more than four grueling months. The contest comprised three stages in all. It may be interesting to note that the first part of contest began barely 11 days after the inception of the e-cell in the SLC. The first event of the cell was the Illuminate workshop which set up the high standards which were religiously maintained by the e-cell. The IIT-B competition comprised many tasks like debates, group discussions and presentations etc which were done well by the e-cell team of SLC.

The team came out at the first position on the completion of first round. When the second round was completed, the team had not only maintained its first position, but consolidated its position by increasing its lead over the runners-up.

This earned the team invitation from the IIT-B to participate in the final round of the National Entrepreneurship Challenge. There, the mentor of the team, Dr. Bharat Bhushan ensured that the team did not fall prey to complacency. The e-cell team worked hard to ensure that all the good work done so far does not go waste. This hard work paid off when the team got first position.

Dr. Bharat Bhushan said that the team got constant motivation and support from the Principal of the college, Dr. Rabi Narayan Kar –be a matter of funds, suggestions or anything , he was always there for us. The team comprised Arnima Gupta, Vibha Mahavar, Aparna Kushwah, Abhishek Bery, Angad Anand, Ashish Asawa, Tanmay Gupta, Anunay Aggarwal, Abhinav Shrivastava, Naman Katyal, Deepak Bhaagwani ,Ayushi Malhotra, Anoushka Bhagat, and Karan Vijayan. Dr. Bharat Bhushan, Ms. Jyoti Sindhu and Ms. Monika Khemani were the faculty members associated with the e-cell of the college. The president of the cell, Arnima Gupta attributed the success to the hard work of the team members, and the unabated support and guidance provided by the convener of the cell, Dr. Bharat Bhushan. 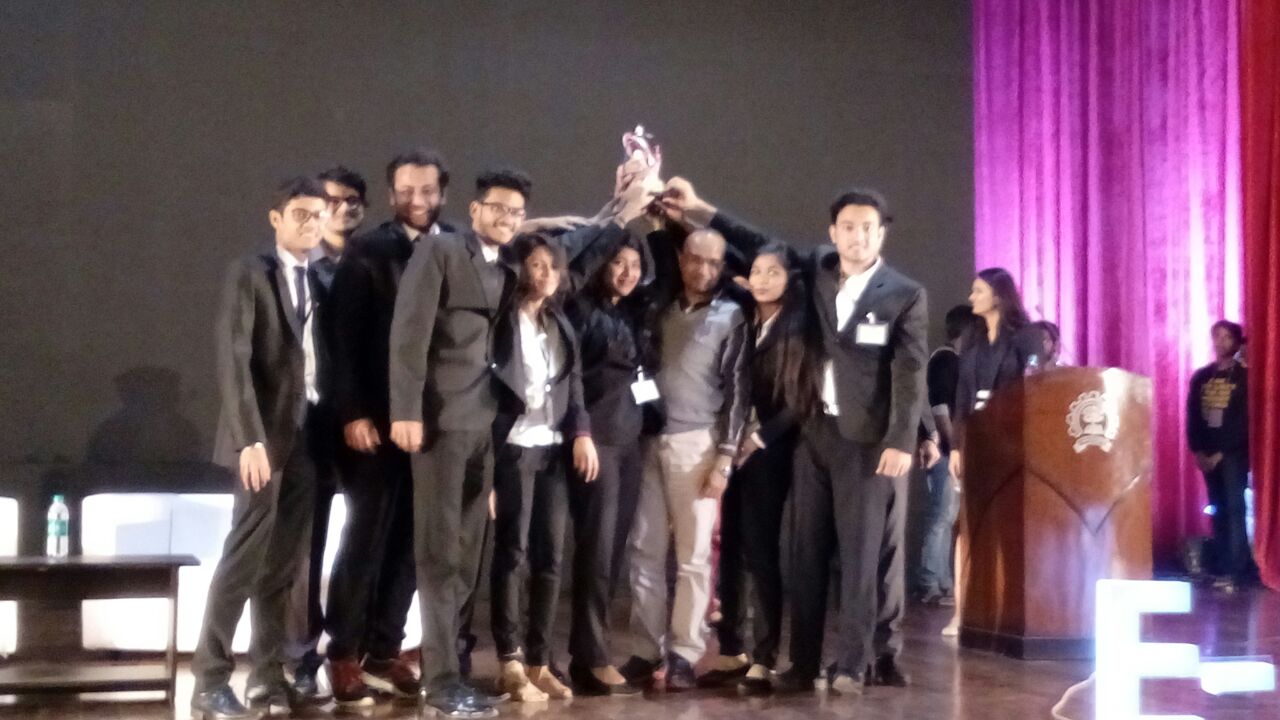 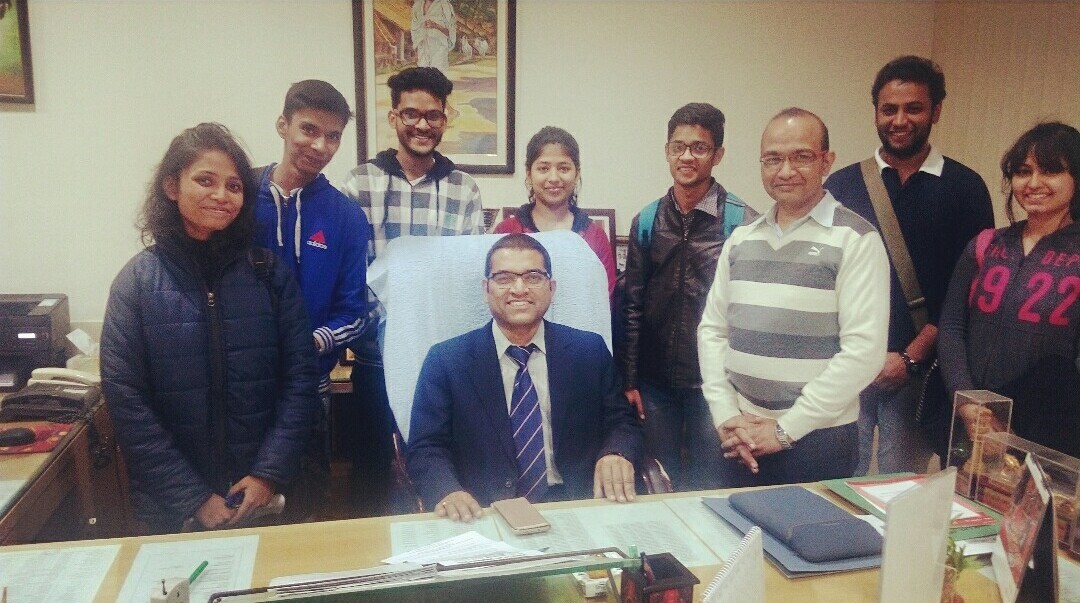 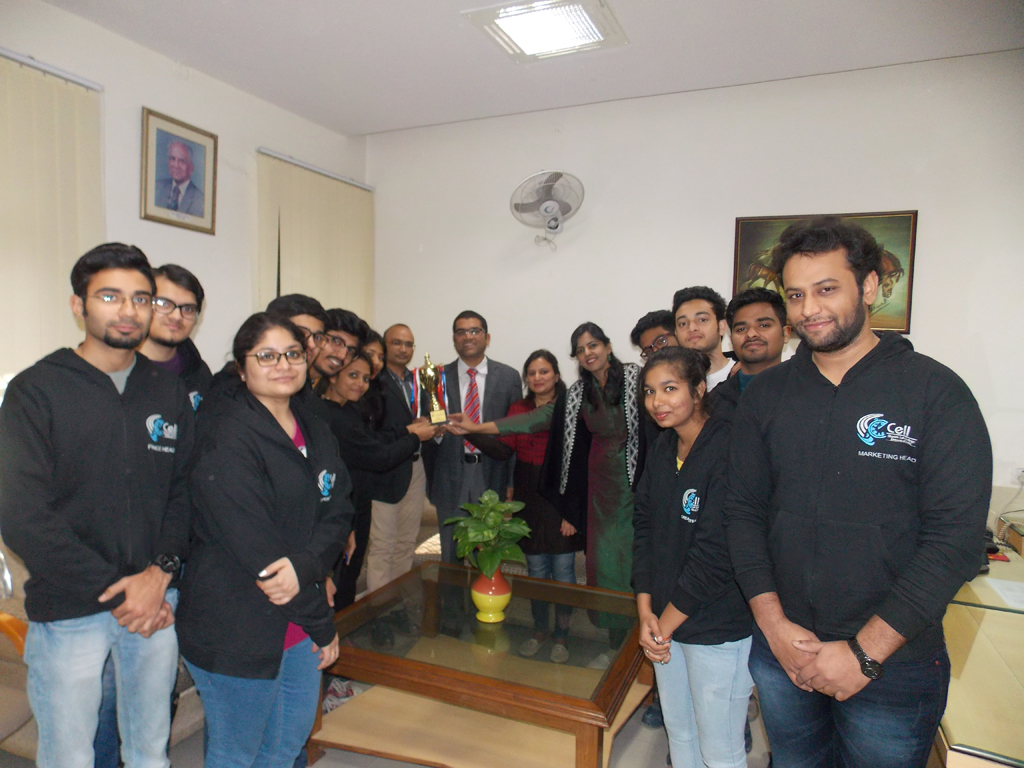 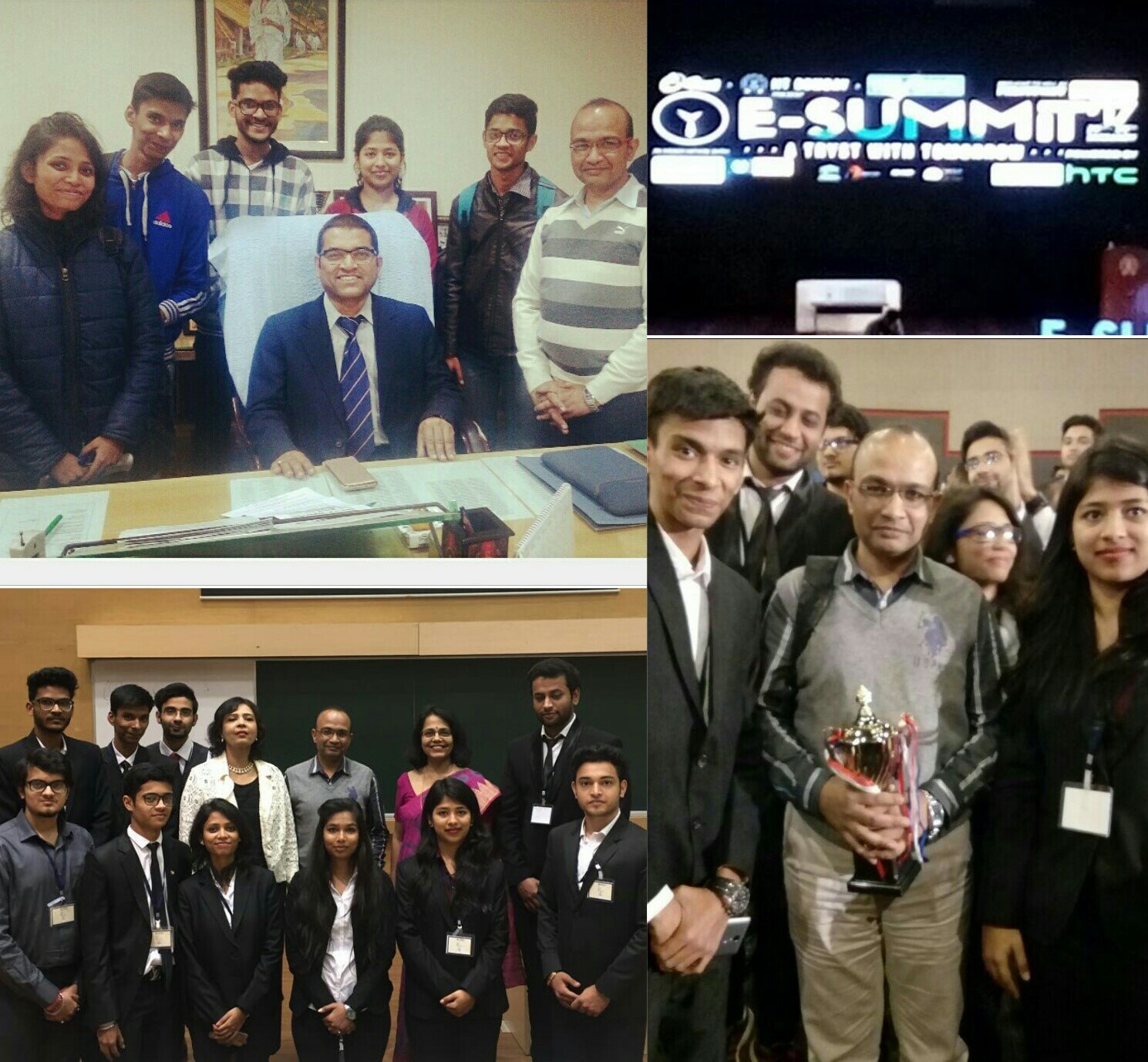 The Entrepreneurship Cell, SLC organised a workshop on 15th September, 17

The Entrepreneurship Cell, SLC organised a workshop on 15th September'17. Ms. Hemika Narang from 98fit visited our campus to share her perspective from a real time startup. The event was well attended by the faculty as well as students, and the response was overwhelming! When a session is comprehensible, questions crop up, and, therefore, the session saw wonderful and very active interaction between the audience and the speaker. Subsequently, there was a mind boggling competition - QuizUp : Quest for Knowledgeable minds. The winning teams got exciting hampers to celebrate their victory.
Our heartiest thanks to Ms. Hemika Narang for her valuable time. We are grateful to our Principal Dr. Rabi Narayan Kar, for always encouraging us and supporting us.Thanks also to our faculty mentors, Dr. Bharat Bhushan sir, Ms. Jyoti Sindhu ma'am, and Ms. Monika Khemani ma'am. It could never be a success without the enthusiastic participants and the E-Cell Team. We hope to continue with many more such successful events. 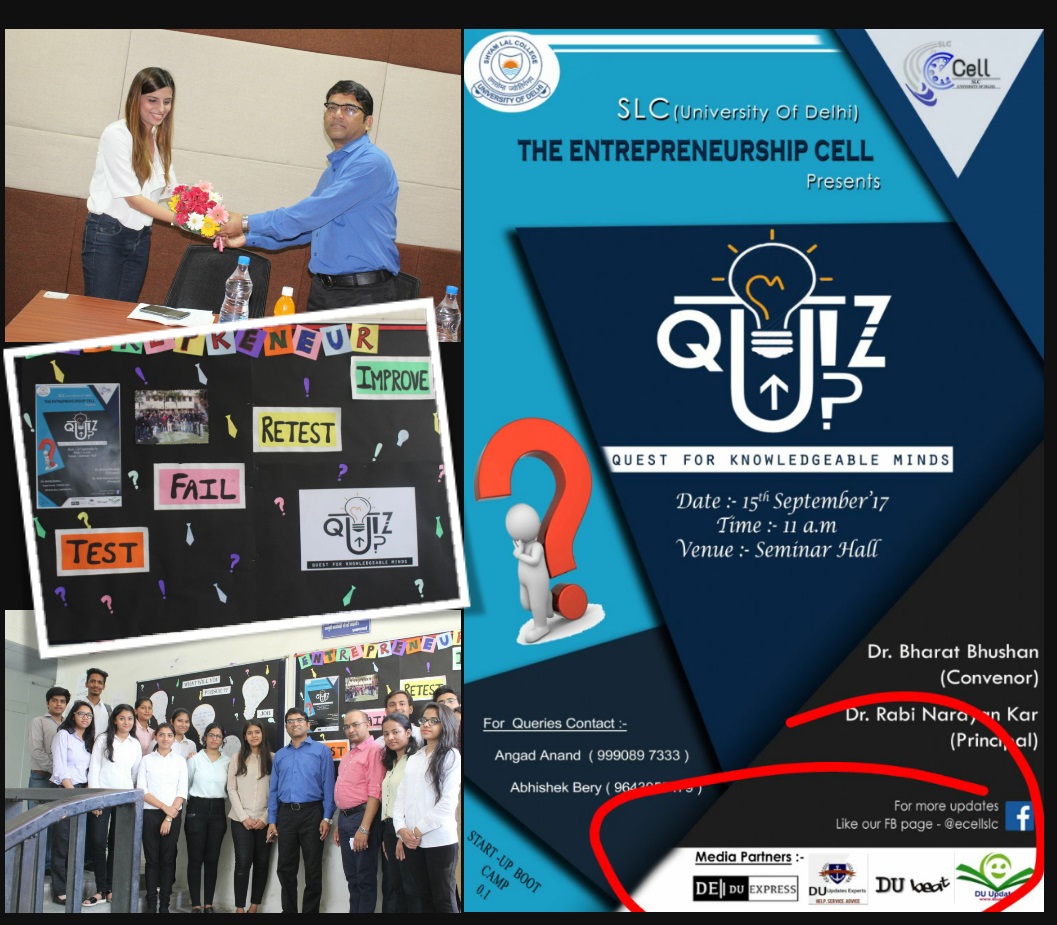 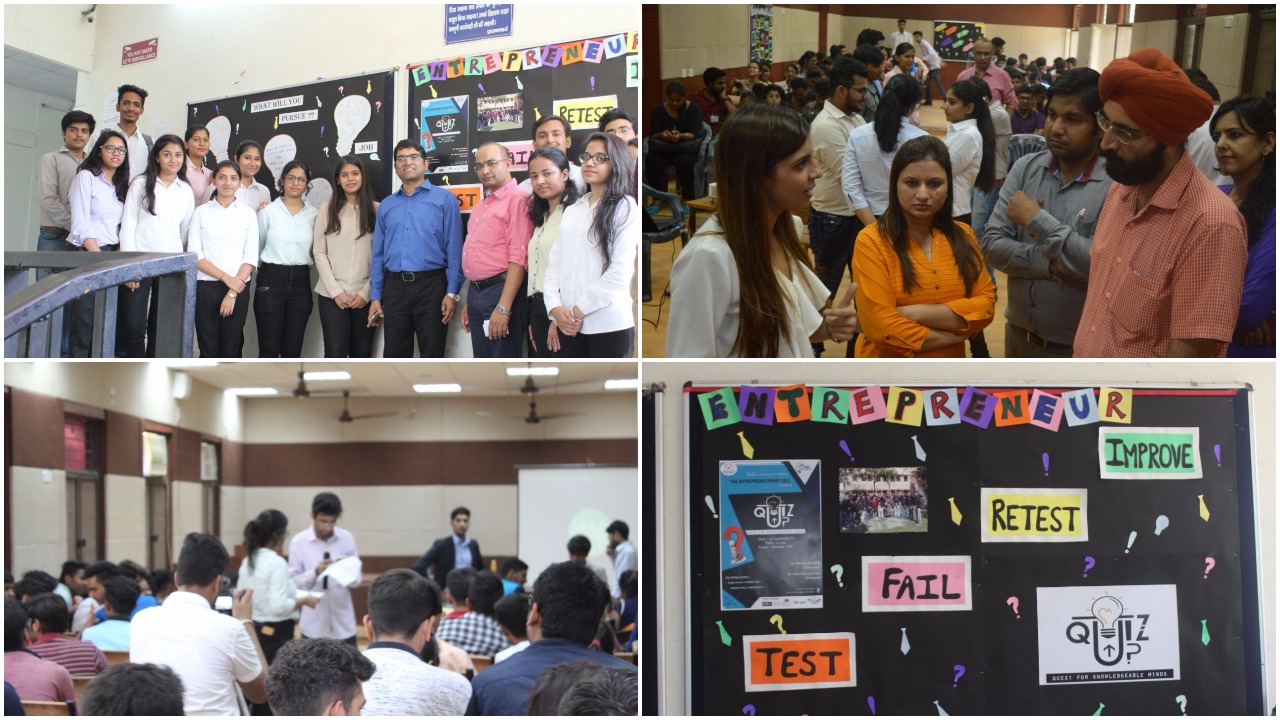 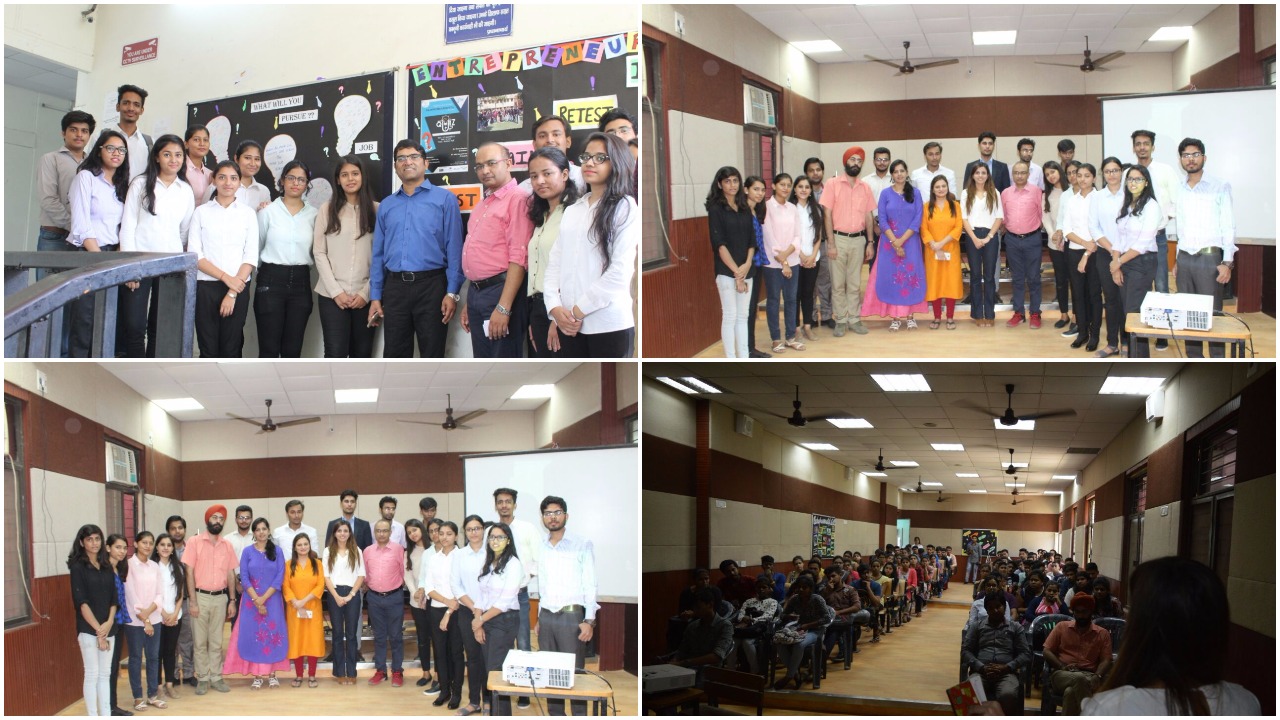 The much awaited event by the E-Cell, called the 'Entrepreneur Day' was held on 17th January, 2017. This was, in fact, a potpourri of various fun-filled events. It comprised three sub-events, namely, Pitch Your Idea, Demo Day and Logo Making Competition.

Pitch Your Idea. Here, the teams were expected to come up with their business idea and pitch the same. Before the starting of this, the Vice-President of the e-cell, IIT-Delhi, Abhijeet Malhotra, held a session in which he shared his ideas regarding entrepreneurship.

Demo Day. In this event, students were to come as pseudo-CEO of a company or start up and were expected to address questions from the audience regarding their respective companies.

Logo Making Competition. As the name suggests, the logo making competition was all about designing effective and communicative logo and tag line for the products which were given to participants on the spot. 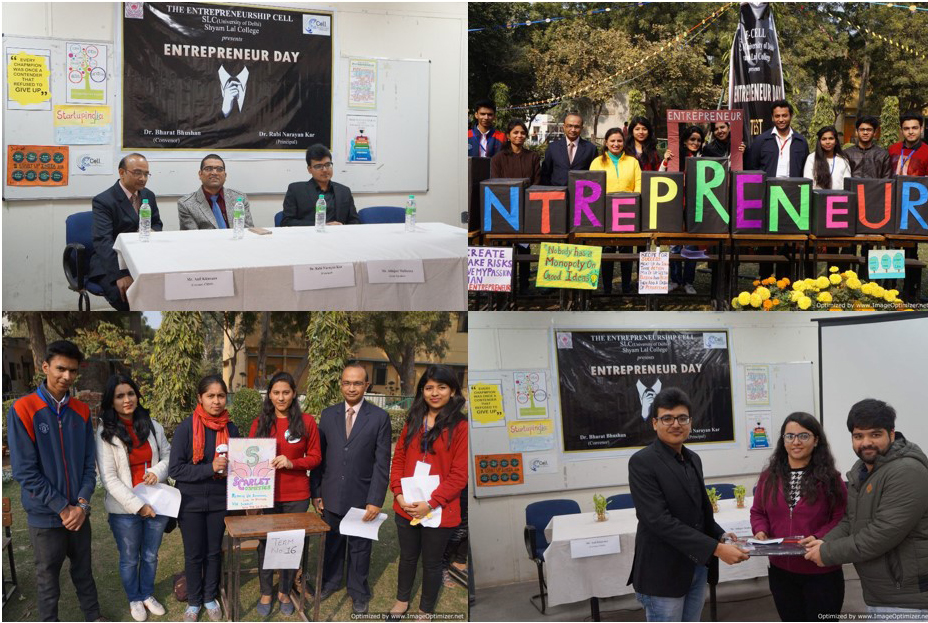 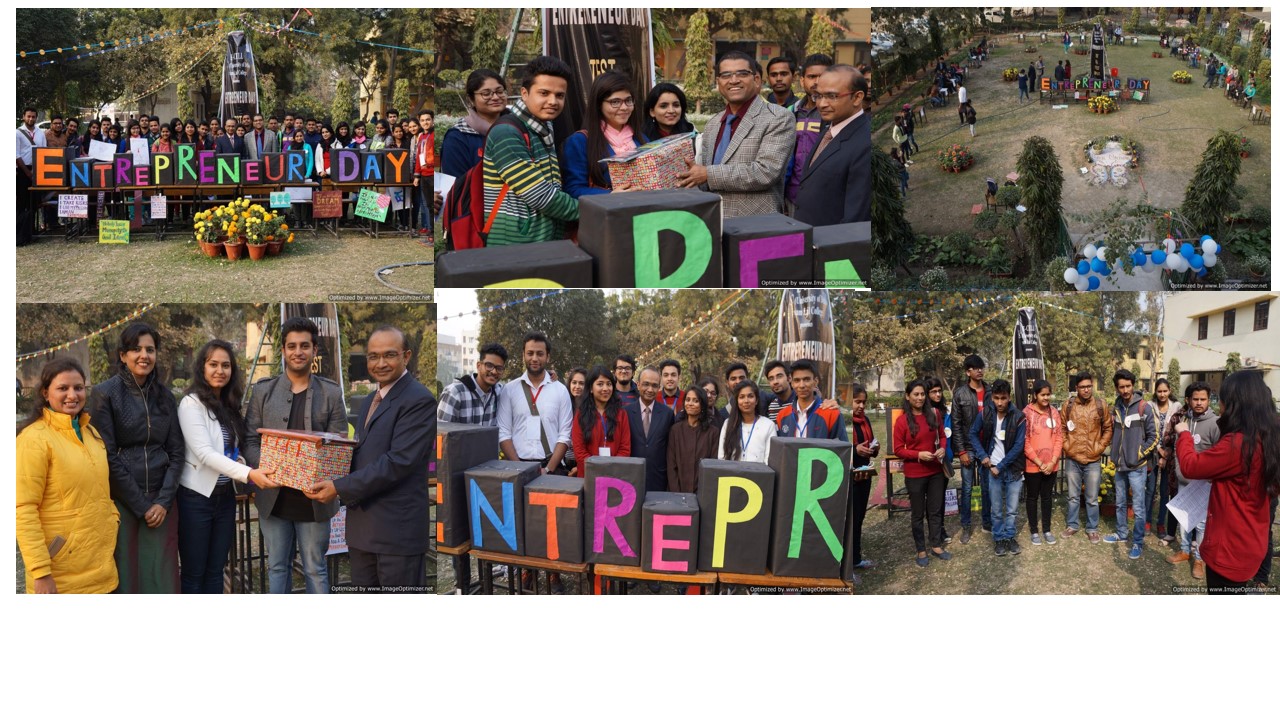 The Entrepreneurship Cell of Shyam Lal College was formed in the month of September with the guidance and support of the Principal, Dr. Rabi Narayan Kar.
Dr. Bharat Bhushan, Jyoti Arora and Monika are the faculty advisors associated with the E-Cell, SLC.

Events Organised by the E-Cell, SLC till December’16.