CINEPHORIA: The SLC Film Club was introduced in 2010 with an aim to discuss film as a form of art. The Club was a platform for the budding film enthusiasts of the college to screen & discuss films that were of great value—ranging from its theme to its importance as a piece of work. The underlying motive of this Club is to keep the spirit of films alive, to enhance it as an art form. And to fulfill that the Club has been actively screening and discussing films of different kinds in its events. Cinephoria also organizes collaborative seminars and workshops with other academic departments and Societies.

Collaborating with the Dramatics Society, the Film Club, in early 2016, organized an enactment of a scene from the very film that was to be screened. Alfred Hitchcock's 1960 thriller Psycho found a new platform. TheFilm Club also screened films such as Life Is Beautiful and Satyajit Ray's Devi,Duel, Il Postino, Sound of Music, The Grave of the Fireflies, Antony & Cleopatra, The Terminal etc. Cinephoria for the very first time in 2013-14 introduced SESTET, a six-film festival, which went for three days, two movies each day. 'SESTET' included the films Run Lola Run, Indiana Jones: Raider of the Lost Ark, The River, Waltz with Bashir, Midnight in Paris and KissakursiKa.

Film Club carried out a very ambitious initiative of organizing one film every week in 2012-13—which resulted in the screening of around 15-20 films across genres and periods. The Society also organized Screenings of two more films around the theme"Discords of Nation: Recordings through Cinema"Firaaq and Ramchand Pakistani on 19th March 2012. Also screened films with FYUP batches—films that were part of the curriculum. 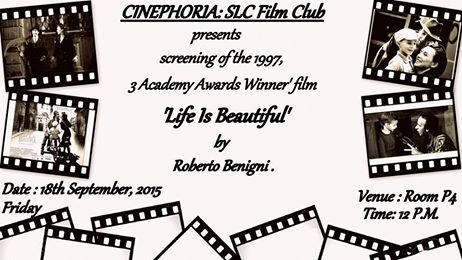 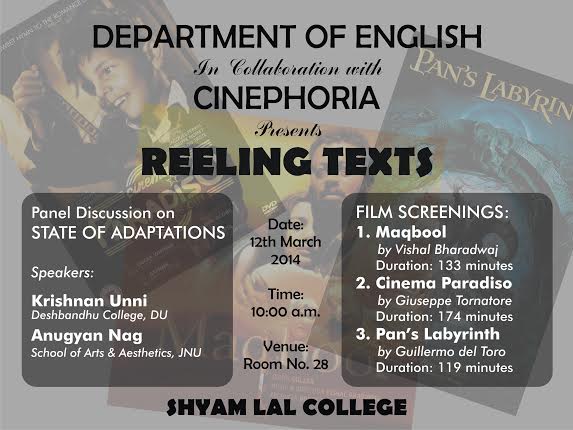